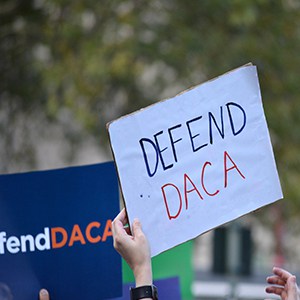 On September 5th, 2017, President Trump’s administration rescinded/terminated President Barack Obama’s DACA Program, established in 2012, amidst criticisms. According to President Trump, he will revisit the issue if Congress is unable to come up with an immigration solution within six months.

The U.S.Department of Homeland Security has indicated the following:

1. Current DACA recipients will be permitted to retain both the period of deferred action and their work authorization documents until they expire unless terminated or revoked before their expiration.

3. USCIS will adjudicate on a case-by-case basis—all properly filed DACA initial requests and work authorization application that was received and accepted by September 5, 2017.

4. USCIS will adjudicate on a case-by-case basis; properly filed pending DACA renewal requests and work authorization applications from current beneficiaries that were received and accepted by September 5, 2017,

5. USCIS will adjudicate on a case by case basis properly filed DACA renewal request from current beneficiaries whose benefits will expire between September 5, 2017, and March 5, 2018, so long as the renewal application is filed and accepted by October 5, 2017.

6. USCIS will reject all requests to renew DACA and associated applications for work authorizations filed after October 5, 2017.

7. Recipients of DACA benefits are currently unlawfully present in the U.S. with their removal deferred. When their period of deferred action expires or is terminated or revoked, their removal will no longer be deferred. They will cease to be eligible for lawful employment and be exposed to enforcement actions.

8. Information provided in DACA requests will not be proactively provided to other law enforcement entities (including ICE and CBP), unless the DACA recipient poses a risk to national security or public safety, or meets the criteria for the issuance of a Notice To Appear or a referral to ICE.

9. If a DACA recipient work authorization is lost, stolen, or destroyed, they will be allowed to request a replacement by filing a new Form I-765.

10. Effective September 5, 2017, USCIS will no longer approve any new Form I-131 applications for advance parole under the DACA program.

11. DACA recipients with a current advance parole validity period from a previously-approved advance parole application will retain the benefit until it expires. However, CBP has the authority to determine the admissibility of such person at the point of entry.

12. USCIS retains the authority to revoke or terminate an approved advance parole document at any time.

13. USCIS will administratively close all pending Form I-131 applications for advance parole under the DACA program and refund all associated immigration filing fees.

The U.S Congress has been called upon to take the right action to protect dreamers.

However, Congress passing legislation with regards to the DACA dreamers before March 2018 is uncertain considering the history and actions of Congress relating to immigration reform over the years.

It’s difficult to trust this administration in light of all its actions so far.

DACA recipients eligible for other types of immigration benefits should explore their options as soon as practically possible. There are no guarantees that Congress will act within six months, nor that this administration will not take enforcement actions.