Lawful Permanent Resident Who Gives Birth Outside The U.S. 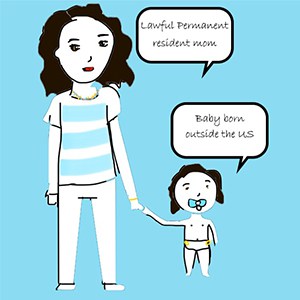 In order to board the airplane and gain admission into the U.S. the birth certificate of the child and evidence of parent’s green card will be required.
8 CFR.211.1(b)(2) authorizes a child who meets the above criteria to travel without a visa and the airplane boarding such a child will not be penalized for allowing a passenger on the airplane without a visa. The custom and border protection officer will complete and create a record of lawful permanent resident status for the child upon verification that:

In the event a child born to a lawful permanent resident during a temporary absence from the U.S. does not meet the above criteria and requirements, the parent will be required to file the necessary Immigration petition and application for the child to obtain Immigration Status in the US.